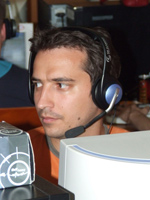 I have started playing Counter-Strike in 1999. In 2000, I have managed to win the first LAN event I ever attended with my former team KO, despite the best teams of the Hungarian scene being present. The event was held in a school’s gym and as far as I can recall, we didn’t even earn a prize. Following that, in 2001, we won the qualifiers to the WCG, and won a trip to Korea. The World Cyber Games tournament was regarded as the Olympics of gamers, as 24 countries were represented by 430 players competing in numerous genres of games such as FPS, sports games and RTS (Real Time Strategy). In order to promote games, Samsung mainly hosted the tournaments in their homeland, as eSports was already regarded as a legitimate sport in South-Korea at the time. Unfortunately, our performance didn’t live up to our expectations, as we ended up on the bottom of our group. However, this failure motivated us to become better. Between 2001 and 2002 we won every Hungarian competition and have once again qualified ourselves to represent our country on the WCG with my new team, FoP (Face of Power). Much to everyone’s surprise we beat Team 3D against the odds,

even though their roster (ksharp, moto, rambo, bullseye and kane) was believed to be the best in the pro scene. To highlight a few of their achievements, they have earned silver and a gold medal the same year during the summer and winter tournaments of CPL, which in comparison to football would be the equivalent of winning the Champions League. They were also said to be the most likely winners of the World Cyber Games championship, which offered a huge prize pool of 1.3 million dollars in total. Following the victory we gained a lot of attention and became internationally recognised. It felt amazing that we were able to put Hungary on the map of competitive esports.

In 2005 I have started playing Counter-Strike: Source and as the leader of my new team, I have once again qualified to the WCG with ancients. However, by this time, the Hungarian community had shrunk in size significantly. With an outstanding performance, we landed ourselves in the top 8 teams in Singapore, which was the biggest achievement ever reached by a Hungarian team at the time. Interestingly, the Counter-Strike community did not quite produce new professional players, hence the scene did not change since our earlier appearances, therefore we knew we were facing excellent teams. The year after we claimed the 4th place on the European Championships, as ancients was invited to compete in Hannover. Unfortunately, a group of Polish players, Team Pentagram, had managed to beat us in overtime in a head-to-head battle. Some of those players are still widely known in the CS:GO community today, as they form a part of Virtus.Pro. Following this, we’ve participated in online leagues with ancients and I’ve been selected to be the leader of the Hungarian national team for some time, which naturally is a huge honour for any player. My active professional career stopped in 2006, however I haven’t quite left esports behind. I have helped in the organisation of multiple LAN tournaments using my technical knowledge and I’ve been a part of the BECUP organising team for 3 years. Throughout my career I’ve become one of the most successful Hungarian players by collecting 26 medals, including 18 gold medals in 1.6 and Source.

I have made numerous videos about my plays, reaching a couple hundred thousand views altogether, which you can check out online at Youtube (or Movievault/Indavieo) along with a few smoke tutorials for CS:GO. Also feel free to tune in on my channel as I am broadcasting CS:GO regularly on twitch.tv. Furthermore, you can find my interviews following this link or find out more about my career in the KODIAK Saga, which is a series of articles I wrote. If you would like to stay updated on my current activities, make sure you follow me on Facebook.